On the left hand side of the frame is a colored strip; white for the group of units and grey for the thousands. On this strip the category of each wire is marked.

Notes
– It is important to take each step, slowly and carefully to understand the use of this material.
– It is also important to give many examples of numbers (in each step) with zeros in it, such as: 1069, 4301, 8140.

Have the child bring the material to the table.
Tell him that before we begin, we are going to need the Introductory Tray of beads.
Have the child bring this over.
Show the child the unit bead and then tell him that all of the beads on the first wire also represent unit beads.
Show his one green bead and say, “So this is one unit.”
Repeat in this way for the ten bar and the blue beads.
Repeat for the hundred square and the red beads.
Repeat for the thousand cube and the 4th wire of greed beads.
Do a Three Period Lesson with the new beads.
Show the child the numbers written on the side of the frame.
Have the child but back the Introductory Tray and have him bring the stamp game.
Take out one of each. See below for placement.

Tell the child that you are going to make 5 units.
Gently slide one unit at a time from the first wire to the right side of the frame. Count each unit as you do so.
montessori, counting without a zeromontessori, counting without a zero
Show the child how to replace the units to the left once done.
Repeat for the tens.
Give the child an amount of hundreds and have him push the red beads to the right of the frame.
Ask him to show you what to do once done. (Replace the beads to the left side of the frame.)
Repeat for the thousands.
Move the frame off to the side and introduce the paper.
Explain the marks and lines on the paper.
Fold the paper in half.
Tell the child that we will now count the unit beads.
Push one unit bead to the right and count: “one unit”.
Write a 1 on the line for the units on the paper.
Push another unit bead to the right and count: “two units”.
Write 2 on the line under the 1.
Repeat this way unit 5.
Then have the child move the bead, count as he does so and then write it on the paper.
When he gets to ten units, he should remember that ten units is one ten.
Move one of the ten beads halfway to the right and say, “So ten units is one ten”.
Have the child mark 1 ten on the ten line
Then gently push all of the unit beads to the left.
Record how many tens there are as you had done with the units.
Repeat for the hundreds.
When you have ten hundreds, move the thousand bead halfway and record 1 thousand. Tell the child that we no longer have any room of the paper so that is all we have to do.

Have the child record this and ask if there are any other beads. Because there are none, have him write a zero in the units column.
Repeat in this way for all the tens, hundreds and thousand.

Tell the child that you are going to show him how to make large numbers.
Move a few units, tens, hundreds, and thousands to the right.
Count the units, tens, and hundreds, recording after each count. (As you count each bead, move them slightly to the left with your finger to separate it from the beads you have not yet counted.)
Read the final number with the child. For example: five thousand, two hundred and eighty-four.
Repeat a few times and have the child count and record.
Once the child understands, write a large number: 2596
Have the child read it and show him how to create it with the beads by moving first the 6 units, then the 9 tens, then the 5 hundreds, and finally the two thousands to the right.
Repeat this a few times until the child understand how to make a large number with the beads from a written number.
Then make a number with a zero in the tens with the beads.
Have the child count and record.
Have him leave the tens blank.
Once he has recorded everything else, come back to the fact that there are no tens and discuss that we can but a zero in the tens to show us that there are no tens.
Repeat this a few times.
Tell the child that you will make 12.
Count the units unit 10.
Move a ten bead to the right and say, “ten”.
Then move two unit beads to the right counting, “eleven, twelve.”
Repeat this a few times.

Making numbers with a zero

This is done in a similar manner as in the above presentation. Begin with a simple number such as two ten beads and no unit beads.
Have the child count the beads and then tell you what the number is (in this case: 20).
Repeat this a few times unit the child understands the concept.
Then move on to making large numbers but making either the units, tens, or hundreds a zero.
Once the child understands, make a number, have the child count the beads and then record the number. Point out that because there are no units, tens, or hundreds, we need to write a zero in the place.

Tell the child that today you will show him how to do addition with the bead frame.
Write an equation on the paper:

Make the first add-in (5 units) with the beads and then add 3 units. Count the total number of unit beads and record.

Leave the unit beads to the right and repeat for the tens, hundreds, and thousands.

Dynamic Addition is done in a similar manner as Simple Addition but show the child how to “carry” over the extra beads.

Have the child first count out five units.
Have him add the add-in but once you get to ten unit beads ask the child how we can get more units.
Move one ten over to the right and the ten units to the left.
Count out one unit to make 11.
Ask him how many units there are: 1
Have him record the one unit.
Have him add the 3 tens and the 2 tens to the 1 ten you began with from the ten units.
The rest of the addition problem is done in the same manner as in Static Addition.

Once you reach 4 units, push all four of them fully to the left.
Have the child count how many units are remaining on the right side of the frame.
Record this number in the units column.
Repeat in the way for the tens, hundreds, and thousands.
Repeat a few times until the child understands, having the child create the numbers and take away the appropriate amount.

montessori, dynmaic substraction
Begin as above in Static Subtraction.
Have the child record his answer for 9 minus 9
Have the child try to take 4 tens away from 3 tens but notice that we can’t.
Tell the child, “We can change a hundred for 10 tens.
Move one hundred bead to the middle.
Move 10 ten beads fully to the right.
Move the one hundred bead fully to the left.
Remembering that you have already taken away 3 tens, count one more and more it fully to the left.
Record how many tens are remaining on the right side. (9)
Repeat as in Static Subtraction for the rest of this work.
In other equations when you must “borrow” more than once, repeat the steps above.
Presentation 4

Tell the child that today you will show him how to do multiplication with the small bead frame.
Write an equation on the paper.
montessori, static multiplication

Have the child create 1 unit three times.
Record how many units you have all together.
Repeat for the tens and hundreds.
Read the total equation with the answer out loud.
After doing a few examples, remind the child that he knows his multiplication tables and he can therefore know the answers without using the beads.
Dynamic Multiplication

Write an equation on the paper.

Note
Dr. Montessori referred to this piece of material as marking the
passage to abstraction.

This material allows the child to stop using the material when he no longer needs it to find the answer to the problem.
Purpose

Direct
– To show he relationship between categories of the decimal
system.
– To clarify position and place value. This helps addition and subtraction.
Control of Error
The child’s own ability and the colored lines on the paper. 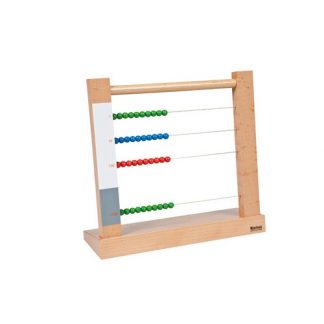